The term “biophilia” might sound like a deadly virus, or a condition associated with deviant behaviour, directly translated from its Greek word roots it simply means “Love of Life”.

Although the inclusion of living elements in the form of green walls or indoor plants may be part of the story, there is a far bigger contribution that biophilic design can make to the built environment.

WHAT DOES BIOPHILIA MEAN?

Erich Fromm, a German-born social psychologist, first coined the term, biophilia, in a publication in 1973 where he posited that humans have an innate desire for connection with nature and other living things. The term was later popularised by American biologist, Edward O Wilson, who further explored the genetic basis for the human tendency to be closely affiliated to the natural environment. Biophilic design seeks to satisfy this innate desire within the built environments where modern humans spend most of their existence.

GOOD FOR THE PLANET

Camila Budden is a specialist biophilic designer in Cape Town. She explains that she strives to find biophilic solutions through a “trans-disciplinary and holistic approach to projects”. She says that, while sustainable design and building efficiency can be quantitatively measured, biophilic design requires a more qualitative approach as it operates at a more emotional, psychological, and sensory level.

The Stockholm Resilience Centre defines nine planetary boundaries within which humans have to exist in order to avoid destroying the planet (and ourselves). Our position within those boundaries (or pushing past them) is graphically displayed. The boundary that deals with “biosphere integrity”, including genetic biodiversity on the planet depicts a horrifying situation. We have severely overshot that boundary, meaning the current biodiversity levels, which are depleting rapidly, cannot continue to be sustainable. 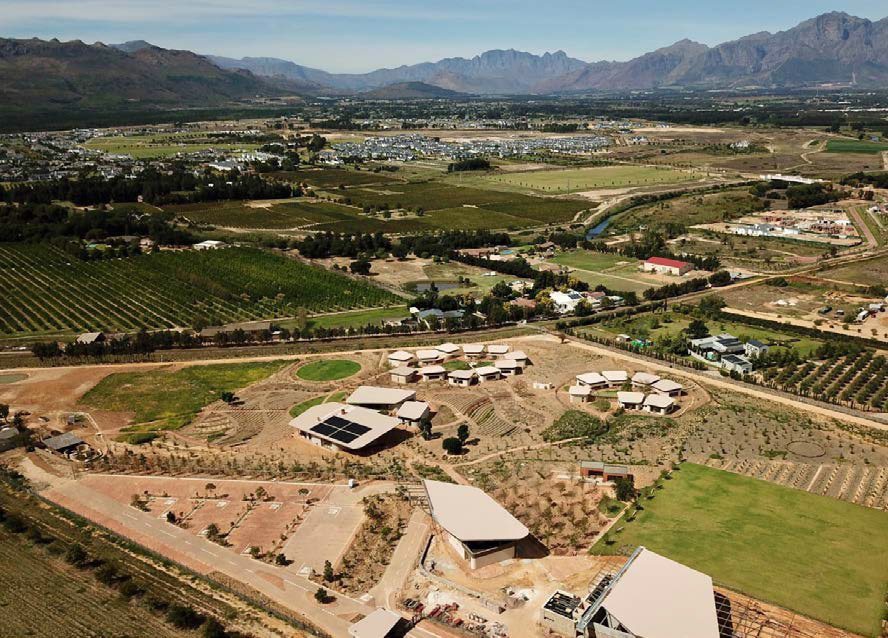 The Green School fits seamlessly into its rural and natural context.

It was this diagram that drove Budden’s biophilic mission. “It is important to highlight the need to support biodiversity in the way we design our built environment, especially as human population steadily increases. Development for human settlement is not going anywhere,” says Budden, “Therefore biophilic design needs to not only focus on human wellbeing as a main priority but also focus on supporting biodiversity. Human wellness will be a resultant by-product.”

Biophilic design is about a sensory immersion for the occupants. The crux of the design should be about human experience, leveraging all the senses.

Theories around biophilic design can get quite complex, listing elements, patterns, and design attributes for consideration in designs. Budden highlights three categories, namely, Nature of Space, Nature in Space, and Natural Analogues.

The Nature of Space considers our preference for organic visuals rather than grids. Natural shapes and movements offer “soft fascination” that provides respite from intensive brain activity. This is the reason that watching trees gently swaying or listening to a babbling brook can have a calming effect.

Nature in Space looks at bringing natural elements into human constructions. This is where the green walls may come in, but it can go further as the lines between inside and outside, between the natural and manmade worlds are blurred.
The use of Natural Analogues in spaces brings the shapes, patterns and textures from nature into buildings. This can be achieved through the use of natural materials like timber or stone. One can also mimic shapes and patterns, like tree forms in structural designs. 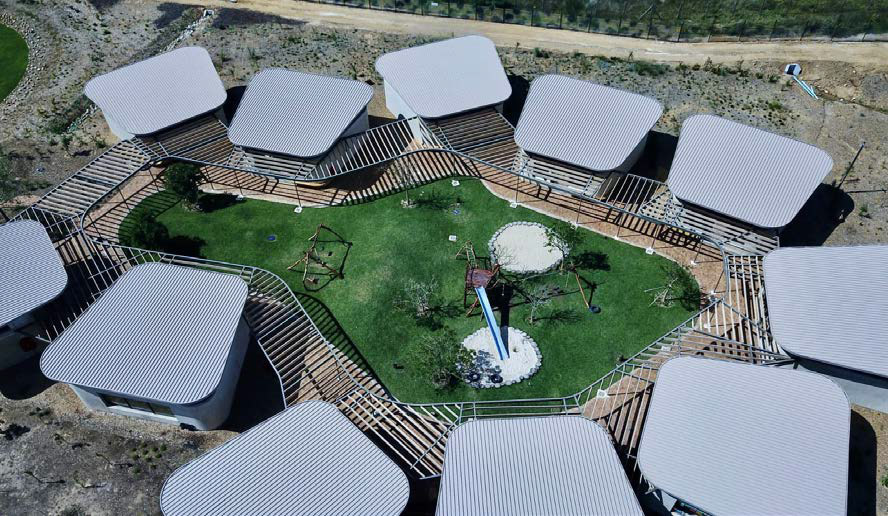 The school design naturally creates safe spaces to both learn and experience nature, from classrooms, to covered walkways, to protected outdoor play spaces to the wider natural landscape.

BIOPHILIA AND THE GREEN SCHOOL

South Africa’s first green school recently opened in Paarl. The green school concept was developed by John and Cynthia Hardy who had a dream to provide holistic education that would also have a restorative effect on the planet. They didn’t just want to create something that was “less bad”, they wanted to create something that gave back to the planet and the community. The first green school was built in Bali and since then the concept has been rolled out into new schools in South Africa, New Zealand, and Mexico.

Alba and Herman Brandt spearheaded bringing the green school concept to South Africa after seeing what a positive and transformative effect the Bali school had on their own children. And so began the journey of designing a new concept in schooling in Paarl, South Africa.

Fabio Venturi is the founder of the Terramanzi Group, the environmental consultancy commissioned to implement the Green School project. He explains that because the project required the creation of a building that would go beyond just not harming the environment further, and it needed to make planet better, it was decided to target a Living Building Challenge (LBC) certification. Net-zero water and energy are minimum requirements within the LBC guidelines, so it is hoped that other Green Star ratings would easily follow if LBC levels are achieved.

Venturi elaborates on the process the design team, including GASS Architecture Studios, had to go through to achieve the high standards required by both Green School and LBC. “It was a complete mind shift for the professionals,” he says. LBC requires a minimum of eight hours be allocated to work-shopping biophilic design principles with the entire professional team.

It is important to highlight the need to support biodiversity in the way we design our built environment.

Terramanzi researched biophilic design theories and developed extensive training material to guide the professional team through a new way of thinking. The programme started with awareness building, went through module training, conceptual idea, progressed through detail ideas and design, and finally resulted in the realisation of the built product.
All professionals were encouraged to talk about aspects of their personal relationships with nature and then to work through various biophilic principles and figure out ways to incorporate those ideas into their various disciplines. “The team was incredibly responsive,” says Venturi. “Everybody really embraced the challenge and produced exceptional ideas and designs.” He passionately explains how biophilic design is about a sensory immersion for the occupants. The crux of the design should be about human experience, leveraging all of the senses. “When we explore designing with water, for example, we talk about how it will look, sound, feel, and even smell or taste.”

A space for growing people

The idea of “space and place” also drove the Green School design. The experience of space and place denotes spatial structures representative of the natural environment that have progressed human health and wellbeing. Examples include prospect and refuge, organised complexity, mobility and way finding, amongst others. Bioclimatic design was a big aspect and was headed up by comfort engineers, Climetric.

The ecology of the place (flora and fauna) and Paarl’s own ecosystem were all studied and mapped in order to drive design principles that promoted the health of the natural area. The design also aimed to celebrate history and culture and the process explored the interactions between humans and the space throughout known history.

Participants were also encouraged to explore “self and space”, to look at how they might engage a space personally, using all their senses. The elements of biophilic design are parts of a design approach that aims to create a sensory atmosphere in which human beings can achieve comfort, health and relaxation through connection with nature.

Direct experiences of nature might include occupant experience of natural light, fresh air, water, weather or natural landscapes. And end-designs included details such as clerestory and picture windows for light and views, cross ventilation, water furrows, waterfalls, and rain chains and many interstitial outside spaces that encourage interactions with the landscape.

Designing for the indirect experience of nature included the use of many natural materials such as wood, reeds, stone, slate, and rammed earth. Images of nature, natural colours as well as natural shapes and forms were also incorporated. Many salvaged materials, such as doors, were used in the design.

These not only added to the sustainability of the project in terms of material reuse but were also left in their aged form, highlighting the passage of time and adding to the experience of place in time. “There were a lot of learnings in terms of materials and natural building methods,” says Venturi, “We had to build samples to test materials in terms of structural integrity, colour and texture since we weren’t only using conventional, tried and tested building methods.”
“Space and place” were considered both at a micro and a macro level, it influenced the design from the individual classrooms up to the complete site plan. Classrooms were considered as safe cocoons for learning, they were then arranged in clusters around protected outdoor spaces, and then those small communities were connected to the campus as a whole. Natural forms such as cell structures, seeded fruit and beehives influenced the concepts for the planning of the whole as well as the smaller details.

Another fine example of biophilia is Balwin’s REID Lifestyle Centre, which achieved a 6-Star Green Star Public & Education Building (PEB) certification. The building is part of an upmarket lifestyle estate located near the Marlboro Gautrain Station.

To enhance the connection to nature, several biophilic features were incorporated. These include the use of natural material such as timber and stonework in the interiors, views over the wetland, and elements that evoke nature – such as the pool and its water fountain which creates both visual and auditory interest.

The objective of this connection with natural systems is to heighten both awareness of nature and, hopefully, encourage environmental stewardship of the surrounding ecosystems. “This challenging location encouraged the team to consider sustainability initiatives which ensure that the development is contributing to its environment – including the development of a watercourse management plan, wetland rehabilitation and a focus on ensuring minimal light pollution from the lifestyle centre,” explains Nomamfengu Mbele, sustainable building consultant at Solid Green Consulting.

While indoor plants are great, this is really only the tip of the iceberg when considering biophilic design. Understanding and incorporating these principles, alongside other sustainability aspects, really can improve the health and wellbeing of building users as well as the longevity of our natural heritage. As well as biodiversity loss, Budden highlights human isolation due to the global Covid-19 pandemic as being a current global issue. “In a time like the pandemic, where people have been forced to stay indoors, biophilic design elements can create an environment that is more supportive for our wellbeing in such a turbulent time of isolation.”