The management of waste poses various challenges for the readymix industry.

The management of waste poses various challenges for the readymix industry, and AfriSam has been following through its commitment to People, Planet and Performance with a range of innovative solutions.

As part of its mission to preserve the planet for future generations, AfriSam has, over the years, developed several strategies regarding returned concrete.

“If we have a quarry site nearby, we are often able to recycle a considerable proportion of concrete that is returned from a site,” he says. “It is dumped in a designated, controlled area of the quarry to harden, and is then crushed and added into our G5 material – subject to the agreement of the customer.”

With the correct planning, AfriSam has also been able to cast blocks and bricks from wet returned readymix before it sets. These have been used extensively on its quarry operations for road markers and other purposes. Where the planning allows, the readymix has even contributed to community projects, going into classroom floors of needy schools, among other applications.

Another potential environmental impact is the slurry residue that remains in a readymix truck after the product has been off-loaded. This has to be rinsed out on a daily basis to prevent material hardening on the inside of the drum.
“The resulting grey water is carefully channelled into settling pits, from where we can use it in a number of plant activities to conserve water use,” he says. “On certain sites, the residue ‘slush’ is agitated in a pond, monitored, sampled and re-used in the batching plant to mix with the cement, aggregate and sand.” 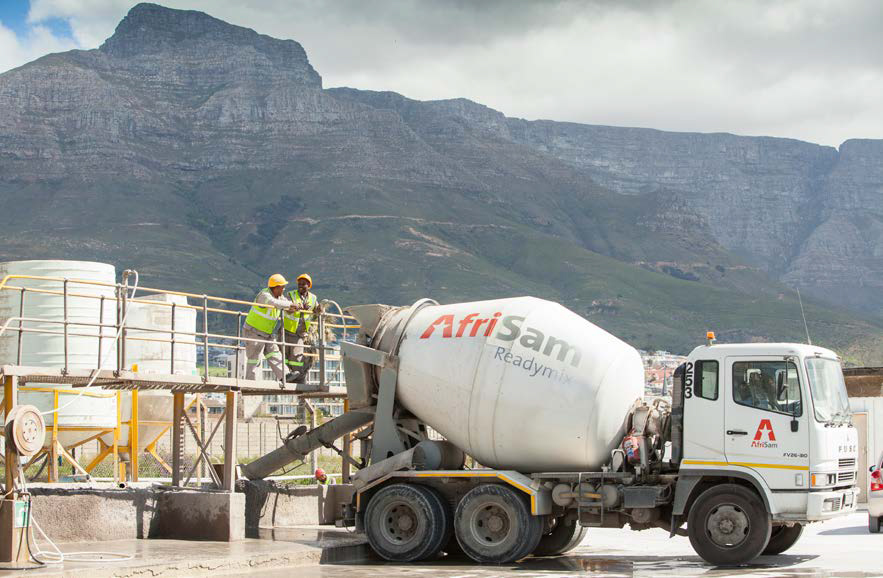 At AfriSam readymix operations, grey water is carefully channelled into settling pits, from where we can use it in a number of plant activities to conserve water.

AfriSam has pioneered the use of covers on the discharge chutes of its readymix trucks, to avoid minor spillages of concrete on site or on the road to or from the batching plant.

“In the unlikely event of any spillage, each plant has a clean-up crew that will respond quickly with the necessary equipment,” he says. This capacity is also valuable as the country’s environmental regulations tighten up generally on the impact of construction activities. A closer focus on possible soil contamination on sites, for instance, means that suppliers must support the contractor’s environmental compliance efforts.

“A truck that leaks oil is a source of soil contamination, so we pay special attention to ensuring this kind of pollution does not occur,” he says. “If it does, we are in a position to respond timeously and mitigate the impact.”