THE INSIDE TRACK
Exxaro's The ConneXXion

The ConneXXion in Centurion, the new corporate head office for Exxaro Resources, was a major winner in the SAPOA Property Development Awards 2021 for Innovative Excellence. The project not only won in the categories of Corporate Office and Sustainability/Green, but also clinched the Overall project title. The base building, referred to as Lakeside Offices building, is one of only a handful of South African buildings to boast an Office As-Built 6-Star Green Star rating from the GBCSA, the country’s highest level of sustainability accreditation. It is also the first building in South Africa to achieve Silver Level WELL certification for Core and Shell by the International WELL Building Institute (IWBI).

Exxaro’s The ConneXXion forms part of the second phase of Growthpoint’s Lakeside development, and having achieved both Design and As-built Green Star Office ratings for the base building, Exxaro followed in targeting the Green Star Interiors rating for their bespoke fit-out

Louwna Joubert and Yovka Raytcheva-Schaap, both Green Star interiors accredited professionals, were Zutari Environmentally Sustainable Designs’ consultancy team on the project. They explained, “Exxaro is the single tenant in the building, the fit-out is fully integrated with the base building and, as such, the fit-out benefits from the high-performing energy and water efficient systems and equipment installed as part of the base building.”

It was designed to be a sustainable building and it made absolute sense for Exxaro to take sustainability through into their office space and target the Green Star Interiors rating.

For Exxaro, the move into The ConneXXion wasn’t solely about a new head office. It was the perfect opportunity to break the mould and adopt a brandnew, contemporary workplace model. Adele van Zyl, director at thinkspace, the design team on the project, says, “A thousand staff members in a five-storey structure means a complex work environment, so for us, the considerations around that were really huge. One of the key things was the approach: to promote collaboration, innovation and communication between Exxaro divisions, sectors which would otherwise have been quite isolated from each other. The whole idea in essence, is around activity-based working (ABW), creating an agile, flexible environment. ABW looks at how you create interiors which dispel the old-school way of very set environments in which to work – very much a modern philosophy about how people work.” Van Zyl adds, “One of today’s biggest, modern workspace considerations and theories, is that people tend to work with people and spark conversations in the common areas like the coffee shop, the lunch spot, and more – it’s that idea behind the formation of the agile workspace thinking.”

But breaking down barriers needs buy-in from everybody: “You don’t want to create interiors in a way that impedes the company’s existing processes and flow, so it had to be built hand in hand with the Group itself.” thinkspace dug deep into Exxaro’s traditional working model to ensure they, as designers, fully understood the workflow of each department, so the design – and concept of an agile environment – didn’t interrupt, but enhanced the flow.

As one of their design decisions to encourage that easy flow between departments and people, thinkspace devised eight well-considered concept areas. So, although staff are constantly crossing paths and meeting in the common areas – with the accompanying constant flow of information – there’s more strategic thinking behind the layout than that. They created eight different work settings for typical day activities to ensure a balance between collaboration and individual work spaces.

Melissa Huntly, associate at thinkspace, unpacked each space as well as the team’s internal conceptual names based on activity-based working. On the drawing board, the furnishings and furbishings of each small to large hub were cleverly styled invitations and reflections of the various functions. The terminology for the zones describes the activity and/or where it is:

The Jump Space – highly approachable work points that facilitate work for shorter periods; The Haven – a small shelter where employees can concentrate on work requiring intense focus; The Meeting Room – supports information sharing, and encourages ideation and interaction; The Cove – near to individual work points or common areas where people can assemble for a short period; The Landing Space – next to the meeting room, where employees can gather before and after a meeting; The Hive – a grouping of workstations where numerous people can harmoniously engage in collaborative and individual work; The Plaza – the vibrant part of the company where people can feel the pulse of the organisation; and The Workshop – the ideal setting for people to work together to generate new ideas and drive their work forward.

Acoustics are always a challenge in any open plan situation. Whether it was the little semi-private pods or bigger more communal spaces, a range of coloured fabric panels over acoustic materials both looks good, and performs well.
Exxaro consists of four key sectors, namely water, energy, agriculture and coal, each with their own brand colours. thinkspace used those colours but, says Huntly, “We explored the nuances of those colours to create an environment which was quite varied and more subtle. Sometimes we shifted from that, so instead of having the entire area colour-blocked green (agriculture), we’d bring in some of the blues, if it was near a water area.” Just as the approach was to blur or remove boundaries between divisions, departments and people, so too, colours suggested, rather than demarcated. “There’s 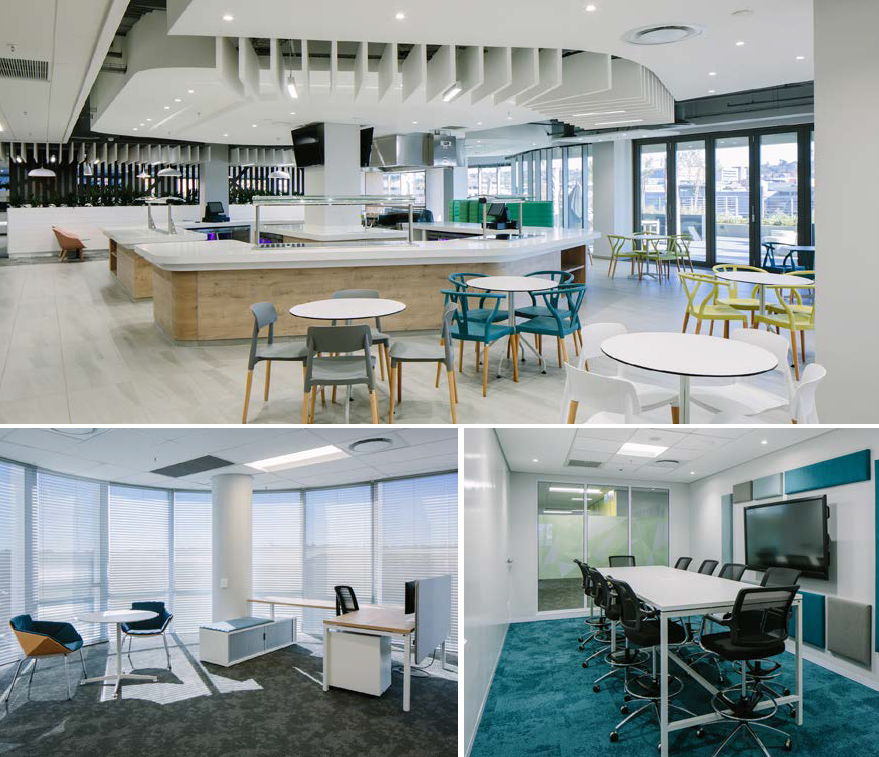 Exxaro consists of four key sectors, namely water, energy, agriculture and coal, each with their own brand colours. thinkspace explored the nuances of those colours to
create an environment which was quite varied and more subtle.

a white, grey marble and timber background to the interiors – a mutual base to everything – and it’s all light and bright. The colours are highlighted against that backdrop,” says Huntly.

Each floor has its own colour, and each of the four corners of every floor features the colours, textures and imagery of one of the pillars: water, energy, agriculture and coal. For some of the wall coverings, the team chose appropriate wood types and textures to reflect that particular zone, as well as hanging high-level imagery which related to one of the four pillars.

When it came to furniture, Huntly described a strong emphasis on organic shaping as a tribute to the building: “The building has these interesting shapes, curves and intersections, and we aimed to mimic that.” All furniture had third party certification and the interior materials were all from a sustainable selection. Little doubt, there’s a more relaxed feeling to this interior: “It leans more towards a – for want of a better word – hospitality vibe than a corporate or clinical one; more as if you’re in your lounge than at the office. That tends to loosen tongues, invite more open conversation with fellow employees, and encourage collaboration.” The big beautiful couches are testimony to the philosophy of being able to work from anywhere in comfort.

The building’s sustainability credentials to achieve a 6-Star Green Star As-Built rating contributed towards the building’s WELL rating: “WELL is all about the indoor environment quality and how occupants

Just as the approach was to blur or remove boundaries between divisions, departments and people, so too, colours suggested, rather than demarcated.

experience the building. For that reason, it was critical to ensure the mechanical services were designed and constructed with that extra level of performance, to ensure a continued supply of fresh air – with rates higher than required – and that the air is appropriately filtered,” says Raytcheva-Schaap.

Joubert adds, “All the finishes installed throughout the fit-out are toxin-free with low or no VOC emissions, these include the paint applications, adhesives and sealants used within the installation and all carpets in office areas.”

Plants, too, play a significant role in the interiors. “Just as the superb, largely green views from the building, contribute towards wellness, so too the interior plants. Exxaro installed considerably more, perhaps even double, the number that the rating requires. It feeds into the value of biophilic design, where occupant wellness is enhanced by connection with nature,” says Joubert. In addition, of course, it enhances the air quality, by the conversion of CO2 to oxygen.

As part of the accreditation process, all occupants and visitors have access to energy and water consumption data by means of a display screen installed in the public area of the building – this offers an insight into the sustainable operation of the building: “The intent is that everybody can learn from it and apply the principles in their personal life at home,” says Joubert. “Very important too, is that there is a collaborative relationship between the building owner and the single tenant, and this was formally put in place with a ‘green lease’ where both parties commit to manage and
operate the building along environmentally sustainable principles while realising mutual benefit.”

It may not be directly related to the interiors, but transport has a multifaceted impact. Raytcheva- Schaap points out the building’s prime location, and Exxaro consists of four key sectors, namely water, energy, agriculture and coal, each with their own brand colours. thinkspace explored the nuances of those colours to create an environment which was
quite varied and more subtle. the knock-on effect it has. “Perfectly placed across from the Centurion Gautrain station, it’s ideal for low-impact staff transport – with plenty of other public transport options in its vicinity also – this allows for easily accessible meetings with clients. It also feeds into the mobility which Exxaro encourages: every staff member has a laptop – no more desktops – and the building is equipped with state-of-the-art bandwidth and internet capacity. This results in less travel and more mobility, within and outside of the building. The activity based working interiors within
The ConneXXion provide staff with a wide range of options to accommodate their specific working needs, and achieve that connected, collaborative hub envisioned by Exxaro.