The evolving role
of lighting in green buildings

Compared to other fields, lighting was late with the conversion from analogue to digital technologies, but now that Light Emitting Diodes (LEDs) are the products of choice for almost all lighting applications, the conversion has picked up speed, with great advancements, especially when it comes to energy efficiency. In 2006 the lighting share of global electricity consumption was estimated to be 19%. This fell to 13% in 2018 and is projected to decline to 8% by 2030 because of the adoption of state-of-the-art lighting solutions.

In the year 2000, a typical office would have been lit by recessed luminaires using fluorescent tubes operated on magnetic control gear, with an average energy use of 10W per m² per 100lux (lux being the unit of measure for light level). Fast forward to 2021 and most offices are lit with LED-based luminaires using only 1.5W per m² per 100lux. A further reduction is achieved by using concepts like daylight harvesting (dimming down artificial light as a function of incoming daylight) and movement sensing (automatically switching off the light in a space when nobody is present). Combining LED luminaires and the aforementioned concepts (realised via the use of lighting controls) results in an energy use of only 0.5W per m²per 100lux. Compared to the value of 10W from 20 years ago this is an impressive reduction of 95%, and it is safe to state that no other field has contributed more to reducing the electricity use of buildings than the lighting field.

But is this the end of lighting’s role in green buildings? Certainly not. It is, in fact, just the beginning, and we can explain this by looking at the relation between lighting and the main trends when it comes to green buildings:

Climate change is a major threat for planet earth and its inhabitants. The Paris pledge to keep the increase in global average temperatures below 2°C can only be met by real action. Globally, building and construction account for up to 40% of CO₂ emissions, hence it is crucial that the lighting industry contributes to decreasing these figures via concepts like green and net-zero carbon buildings.

Lighting and Health and Well-being

It is well known that lighting impacts the health and well-being of people in buildings. There is a growing preference for more daylight entering buildings as it is the most natural light, but also reduces the need for (and energy consumption of) artificial lighting.

No other field has contributed more to reducing the electricity use of buildings than the lighting field. 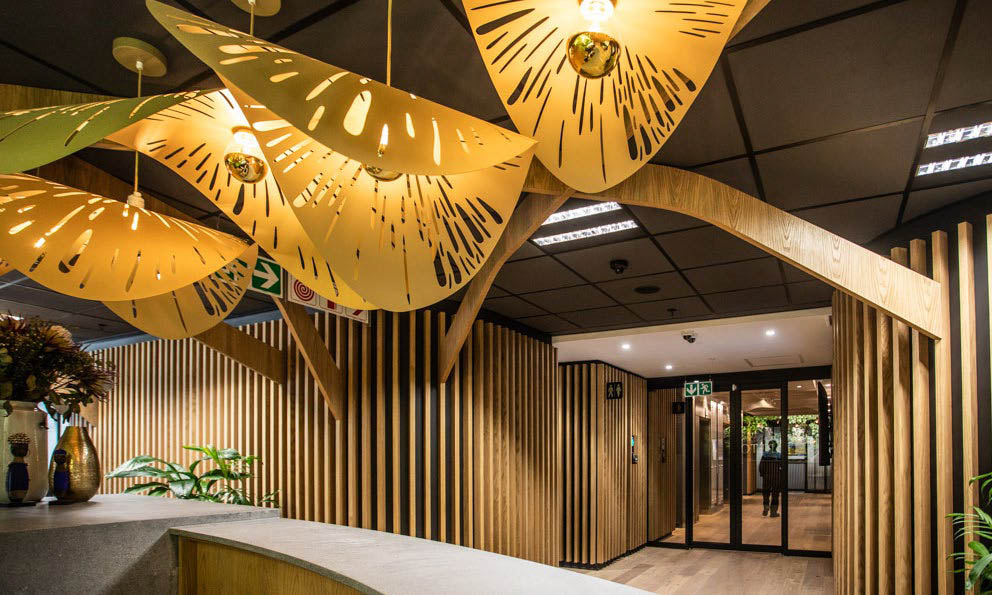 Research over the last two decades has shown the large biological impact that lighting has on human beings, especially on the support or disruption of the circadian rhythm. Human Centric Lighting (HCL) or biodynamic lighting are names for artificial lighting concepts mimicking daylight, with the potential to:

HCL is perfectly aligned with the growing realisation that green buildings are not only buildings with minimal impact on the environment, but also healthy places where employees and visitors feel and perform well. So, it is expected that the use of HCL will become an integral part of all green buildings.

Buildings are not only becoming greener, but also smarter. A ‘smart’ building uses data regarding what happens in the building to optimise that building’s performance (and potentially reduce its energy use).
The latest high-tech lighting systems can seamlessly integrate with digital infrastructure such as building management systems. Going forward lighting will be chosen not only based on its lighting performance but increasingly also for its data capabilities. 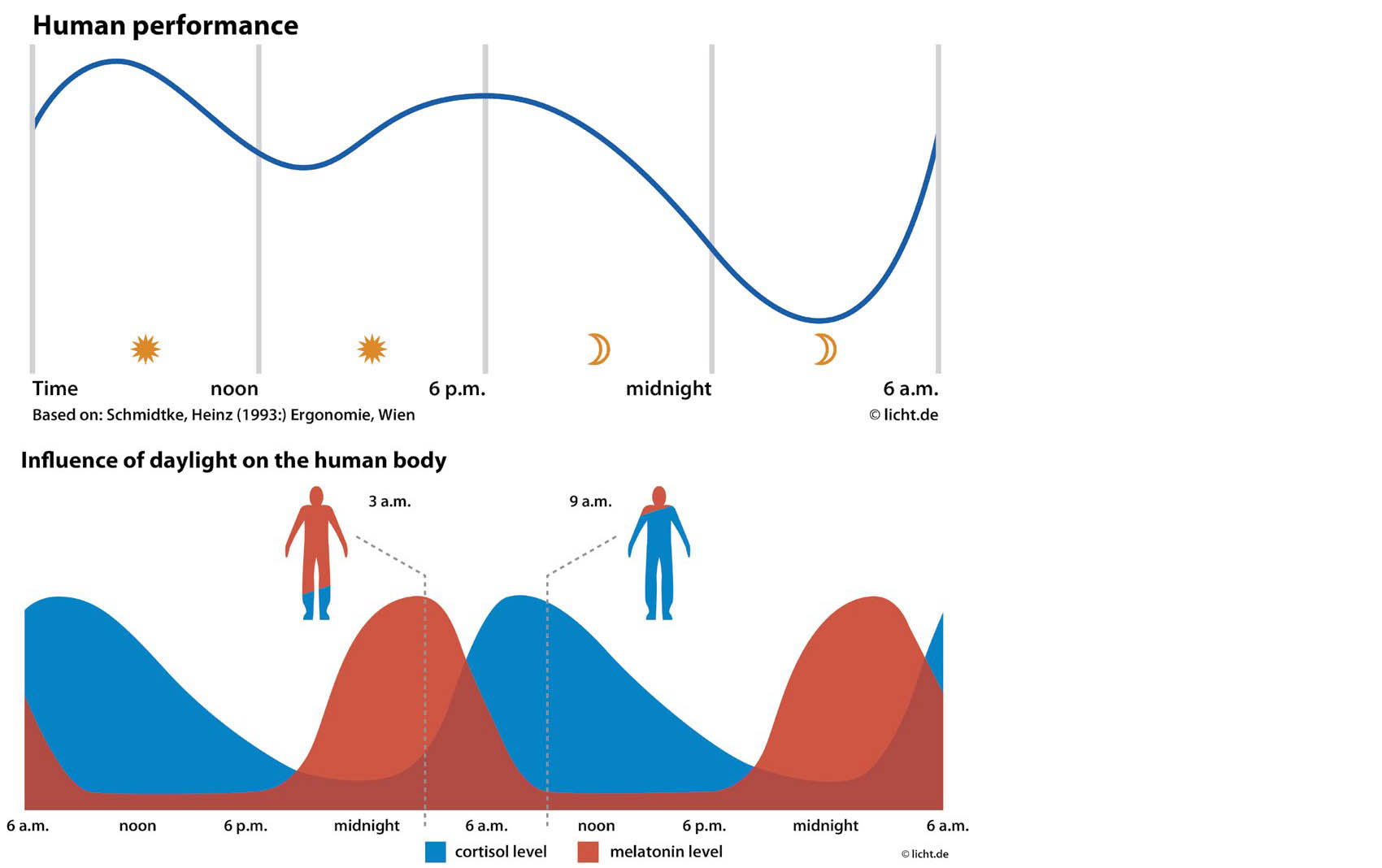 Lighting has a large impact
on how people feel and
behave during the day.

Apart from the above, lighting also offers digital concepts like LiFi – a wireless communication technology which utilises light to transmit data, and light-based ‘Indoor Positioning Systems’ which are used for navigation purposes. These are expected to be increasingly implemented in green buildings. 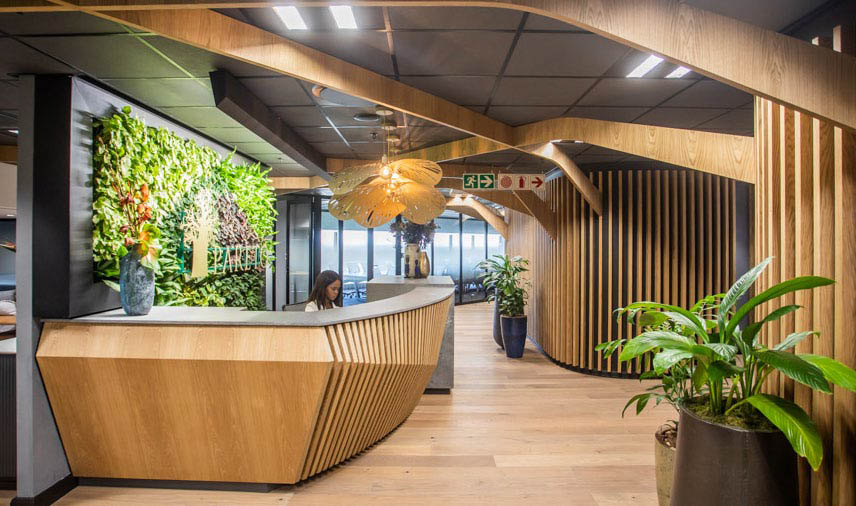 The combination of very efficient LED luminaires and lighting controls was a key factor in achieving a 5-Star rating for the Pareto Head office in Sandton.

The use of lighting controls was a great contributor in realising a very efficient lighting installation for the renovated ABSA Tower in the Johannesburg CBD.

LED-based lighting products offer a large potential to make buildings more energy efficient and hence more sustainable, but lighting offers more opportunities to directly increase the sustainability of buildings. In the past, fluorescent lighting was the technology of choice to illuminate buildings, and the lamps used were low pressure mercury lamps which needed replacement every few years. The small amount of mercury inside these lamps created a potential environmental hazard not disposed of correctly.

LEDs do not contain any hazardous materials and, together with the drivers needed to operate them, can be considered ‘electronic waste’, which is recyclable. Moreover, due to the long lifetime of both LEDs and drivers, they need to be disposed of much less frequently.

More can still be done regarding sustainability, like the implementation of circular economy principles. One application of circular economy principles in lighting is Light as a Service (LaaS). LaaS replaces to conventional concept of ownership. It is a service-based business model in which light service is charged on a subscription basis rather than a one-time payment. In such a model, a user would ‘pay per lumen’ to a supplier that owns the equipment. In the case of LaaS, the supplier has an incentive to extend the longevity of the equipment, reduce failure rates and further increase efficacy at the end of the agreed period. As no upfront investment is needed, LaaS also removes one of the major hurdles to invest in energy efficient lighting, which is often the higher upfront capital cost.

Lighting has greatly contributed to making new buildings greener and can make existing buildings more efficient as well. Lighting also has the potential to make buildings ‘smart’ and more sustainable while improving the health and wellbeing of the building occupants. Lighting should always be considered an integral part of a green building strategy, as it offers significant ‘quick wins’ in terms of energy efficiency and reduction in consumption.

Originally from the Netherlands, Henk Rotman moved to South Africa in 2010, and has worked in the local lighting industry ever since, in various roles. Presently, he is the Gauteng business development manager for Tridonic. Since 2017, he has been the chairperson of the Gauteng branch of the Illumination Engineering Society of South-Africa (IESSA). His passions in lighting are energy-efficient lighting and new lighting innovations.