The failure of the garden city

Don’t we all love the wonderful purity of an expansive green lawn, people picnicking under oak trees, children playing in a publicly accessible but safe park. However, is this utopian European picture of a great public park naïve in a city like Johannesburg?

I have lived in Johannesburg my whole life. I can’t remember a single time I went to a public park as a child. My parents owned a large home in the northern suburbs with a private garden set out in a classical French style. The approach to the landscape design matched the architecture well, namely a philosophy of imposing symmetry and human control over nature. Sadly, behind our high, electrified walls we had no need as a family to use public parks. This left us as children climbing trees in safety of course, but I wonder if opportunities to meet others of different races, religions and social-economic positions were missed. For me, one of the most important aspects of any public design scheme, is creating opportunities to build cultural respect and, ultimately, cultural unity through dialogue, but also something as simple as public witness as personified in the Zulu greeting sawubona which literally means ‘I see you’.

There is magic that takes place in Johannesburg’s parks at night. Spotted eagle owls begin hunting rodents, small spotted genets clamber through our anthropogenic forests, and the homeless silently take up many sleeping spaces under trees, bridges and bushes. 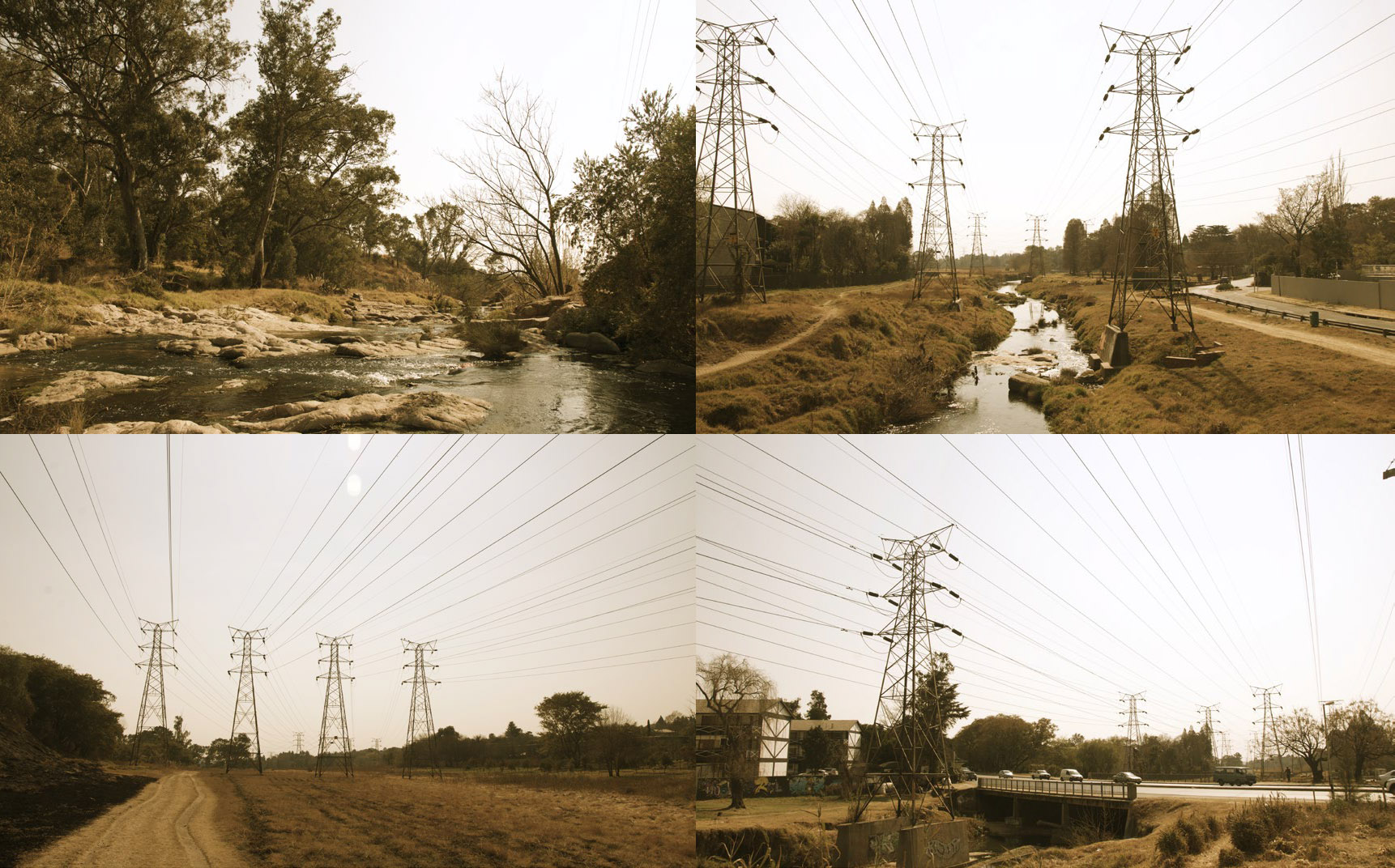 The location for the Park of the Light project, next to the Braamfontein Spruit in Johannesburg.

Many of Johannesburg’s parks have been fenced to control access as a safety measure. This has changed them from a public space to a semi-public space. This trade-off leaves many parks without any formal nocturnal function, and so they become ghostly quiet at night as the middle-class escape to their fortified homes.

There is, however, magic that takes place in Johannesburg’s parks at night. Spotted eagle owls begin hunting rodents, small spotted genets clamber through our anthropogenic forests, and the homeless silently take up many sleeping spaces under trees, bridges and bushes. In light of the above, we felt obligated as a design firm to begin to uncover and highlight this magic to others as we simultaneously sought to develop a model that could move our public parks into an era of contemporary usage.

Noting the challenges but also opportunities in our parks, we presented our company to Joburg City Parks and asked them for their most difficult problems to solve. Homelessness, crime and the lack of finances to manage their parks came up as core issues. Many public parks have uniquely local problems, such as the Braamfontein Spruit (said to be the longest longitudinal park in the world) which has water polluted with e.coli at levels dangerous to human health. These rivers flood dangerously quickly, absorbing most of our stormwater run-off that comes from the excessively hardscaped areas (non-permeable areas to water like tar or paving) of our surrounding roads and buildings. The speed of the alluvial water-rise within these rivers has caused many deaths from floods over the years. If we don’t create sustainable urban drainage systems (SUDS), these deaths will continue.

So how do we start to develop a model to solve such difficult problems? Our first question was to ask who the real visitors of public parks are. We interviewed many of the homeless and found some have been living in our public parks for more than 30 years. This disproved our assumption that the homeless were only temporary visitors of parks. Of course, many are only temporary visitors, but many are resident and arguably greater users of the parks than anyone else. This led us to form a strategy around the employment of these visitors into what we called an Urban Park Regeneration Strategy (UPRS), rather than dismissing them as outside the scope of existing park policy. Many of these visitors knew local parklands much better than us and had inspirational ideas for development. Things like urban farming, outdoor cinemas and park restaurants all became ideas of social and economic regeneration. In our projects we were able to bring together surrounding residents and the homeless, in collaboration with Joburg City Parks, to take back responsibility of our public park spaces.
Much of our initial conversations were around whose responsibility it is to maintain our parks. The current reality is that Joburg City Parks does not have the finances to maintain all our public parks as effectively as they need to. The responsibility in the short- to medium-term therefore falls to the residents that live around such areas. Once this shift in mindset, that you are also responsible for the maintenance of your public park, happens, people come together. We put our skills in urban, landscape and architectural design to use in order to develop a maintenance plan that could be implemented by municipalities. This was conceptualised into a pilot project located on the Braamfontein Spruit, poetically called the ‘Park of light’.

The Park of Light

The first hurdle in this project was to break the preconceived idea of what a park should look like and what functions it should have. The idea, for example, that the grass must be cut as soon as new growth appears was shown to be ecologically damaging. Grassland, being Johannesburg’s original landscape before the city developed, is one of the most productive of all terrestrial biomes. The starting point of the project was to build a healthy, indigenous grassland eco-system. This started by mapping exotic, invasive and indigenous species that existed onsite. We also removed invasive species, re-introduced the correct indigenous species and linked that eco-system into the existing man-made urban forest (a largely overlooked ecological system in the city that needs much strengthening). The second step was to train the staff, the resident homeless that we employed, to know how to manage such a system.

Once the baseline reference habitat was established for the park, other social and economic activities were added to activate the system and make it relevant for the local community. With adequate biodiversity buffer-zones, urban farming was designed that would grow produce for high-end, park-based restaurants. The homeless were employed and trained to manage the farm and protect the biodiversity of the riverine habitat. Water for farming was collected from rainwater-harvesting systems installed in middle-class homes adjacent to the park. This system helps to reduce the large amount of stormwater being channelled into the river during the summer. 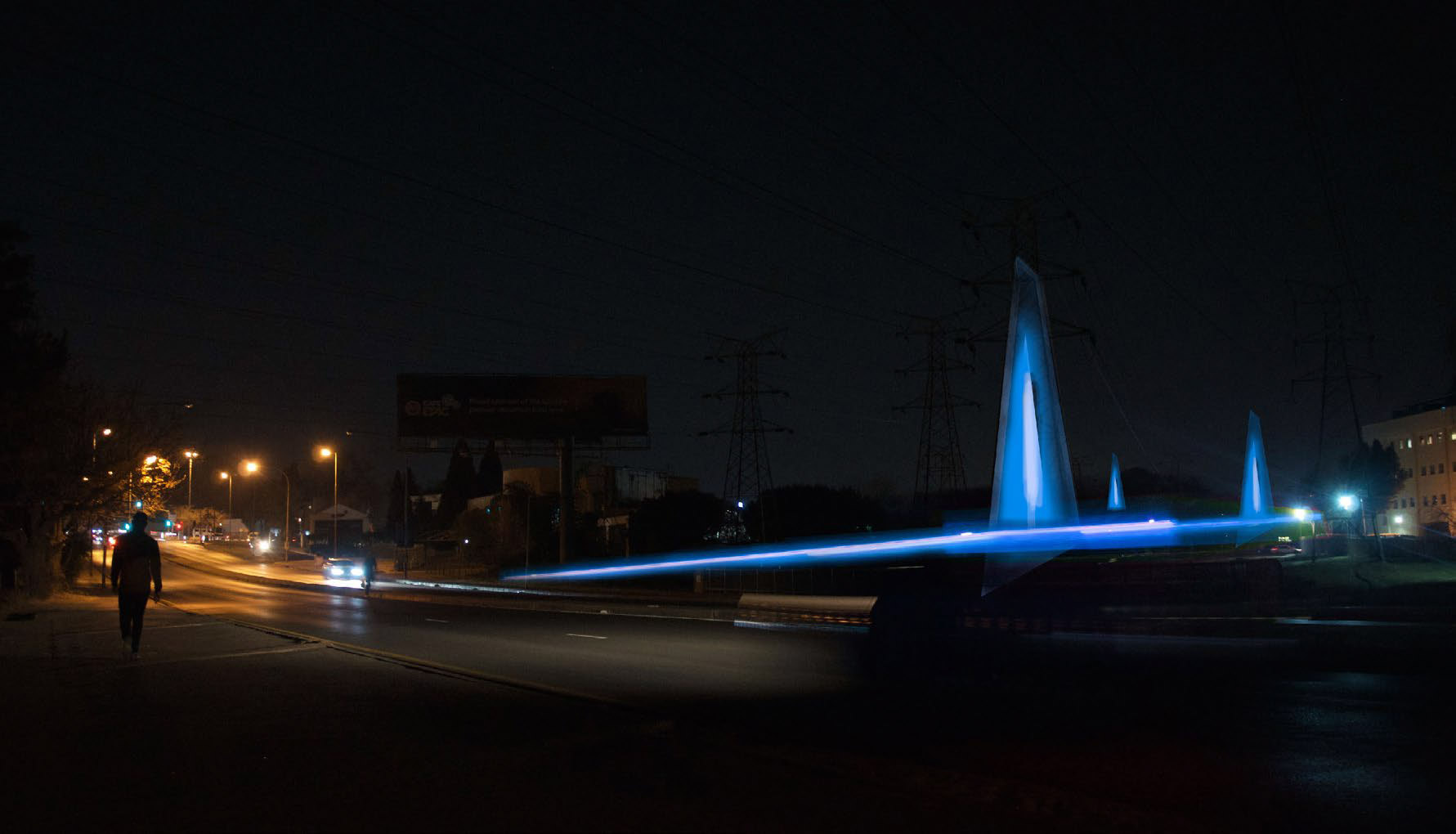 The cleverly designed lighting system changes colour according to air-pollutants.

Temporary sleep pods provide a safe space for the homeless to sleep.

Once this shift in mindset, that you are also responsible for the maintenance of your public park, happens, people come together.

At night, an air-pollution-sensing lighting system (sensing gases such as CO, CO₂, NOx) educates and encourages people to use the park on their way to an outdoor dinner. A temporary art gallery located under a bridge at the entrance to the park was designed to discourage people from sleeping under the bridge because it becomes very dangerous when the river floods.
The most difficult component to solve was the homeless sleeping in the park. When someone permanently sleeps in a park the space changes from public to private, which we wanted to avoid. However, until more permanent facilities exist, we had to provide some sleeping accommodation for vulnerable people. Our design includes sleeping pods for the homeless that can be used only at night. These are reserved for those who are part of the ‘Park of Light’ project, as they move from homeless and unemployed to employed and eventually into formal accommodation.

Future Johannesburg as a water purifier

Many people don’t know that Johannesburg sits on a continental watershed, where rain that falls to the south flows to the Atlantic Ocean and rain that falls to the north flows to the Indian Ocean. One aspect of our vision for the city is for it to return the water that flows into these river systems cleaner than it was received, free of pollution and full of life. This is the opposite of what is happening today.

We cannot keep treating our public parks as if they are places that are only the municipality’s responsibility to maintain. With the limited tax base the government has, it cannot fix issues such as these without our support at a local level. If you don’t know how to help, look around at the community in which you live, join your local community organisation and understand your urban issues from a more holistic perspective. Let’s upgrade our parks to indigenous reference habitats that put biodiversity first, intelligently balancing this with a social and economic system that provides the finances and community we need to keep these places safe and healthy for future generations. Johannesburg is not just the modernist inner-city skyscraper or the glazed Sandton office block, it is also the man-made forest with jacaranda in bloom from which the hadeda (grey ibis) pronounces its loud morning call. Perhaps if we regenerate our parks, we can also regenerate our communities which form the basis of attaining our South African dream of a democratic and economically equal society. Perhaps then our children will make the special memories we didn’t, in a city at peace with itself and its environment.