As a signature new development along Portswood Road in Cape Town’s bustling V&A Waterfront, The Ridge is certainly striking to look at, with its sawtooth cross-laminated timber and glass façade.

It’s what’s on the
Inside that Counts

Still at an early stage globally, but fast gaining traction, ecobricks – essentially recycled PET beverage bottles filled to constant density with waste plastics – were first used in Guatemala as an insulating wall-filling medium for various buildings, including schools. Not only do they replace other materials which would be used in construction, but they eliminate unwanted plastic waste that would otherwise go to landfills or end up in the ocean. These substantial benefits were not to be overlooked by the V&A Waterfront, which is renowned for its bold steps in the circular economy and against the environmental challenges our planet faces.

“We call this ethical development approach, which focuses on sustainability and care for the people who will use our buildings, our ‘normal’,” says V&A Waterfront CEO David Green. “This can be seen in the number of Green Building Council SA (GBCSA) Green Star-rated buildings under our belt in the Silo District, including the Silo Hotel projects.” Against this backdrop, the Ridge consultant team were briefed by the V&A Waterfront to find ways in which to incorporate ecobricks into the construction of the building, making it the first large commercial building in the world to do this.

Arup proposed to use the ecobricks as void formers, materials (often polystyrene) used by construction companies to fill space and reduce the amount of concrete required. In order to source the ecobricks required, Ian Dommisse from Ecobrick Exchange introduced the development team to Long Beach Mall in Noordhoek, which had become the collection point for ecobricks by the local community since 2018, even though there was no confirmed end use for them.

The mall donated their ecobricks to the project in return for a donation made to the Bhongholethu Foundation, an NGO pre-school serving the Masiphumele settlement. The pre-school is putting the funds towards their dream of constructing an entire ecobrick house. The balance of the total 12 000 bricks (which equates to approximately 5.2 tons of single use plastic) were sourced by the community linked to the Eros School for physically and mentally challenged children in Athlone, along with some other eco-warrior volunteers in various schools. “For communities, this presents a practical solution to unwanted waste and a way to raise funds for their communities,” says Green.

The ecobricks were carefully checked for compliance, each weighing 418g. 84% of this plastic would have ended up as waste, and by using already-existing material rather than purchasing material still to be manufactured, the project saved 30 tonnes of CO₂. This is the same saving as taking 6.5 passenger vehicles off the road for a year.

The building is expected to generate around 25% of its own energy requirements. 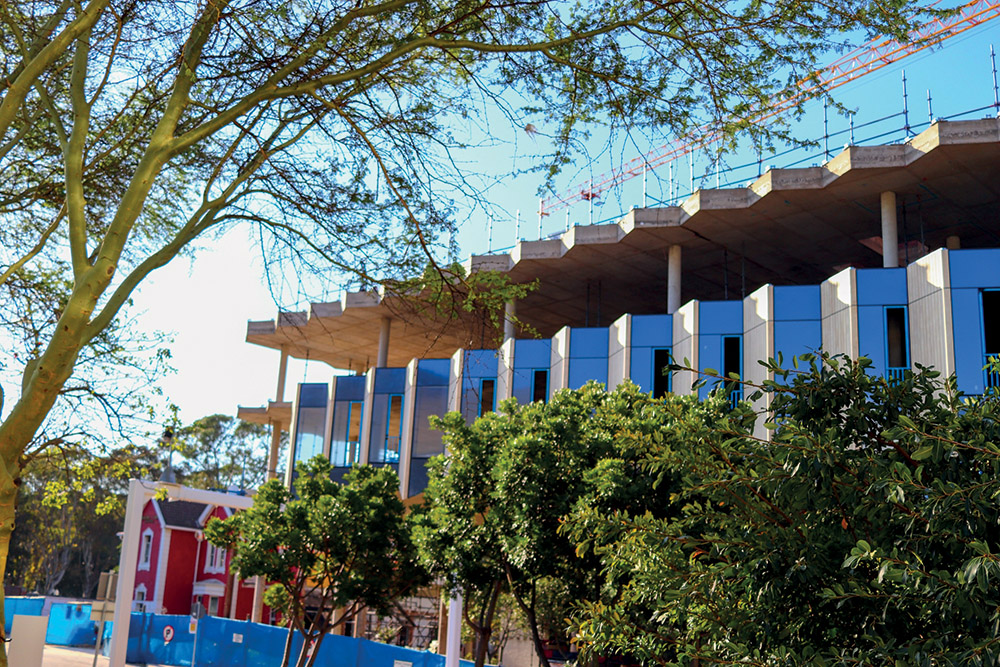 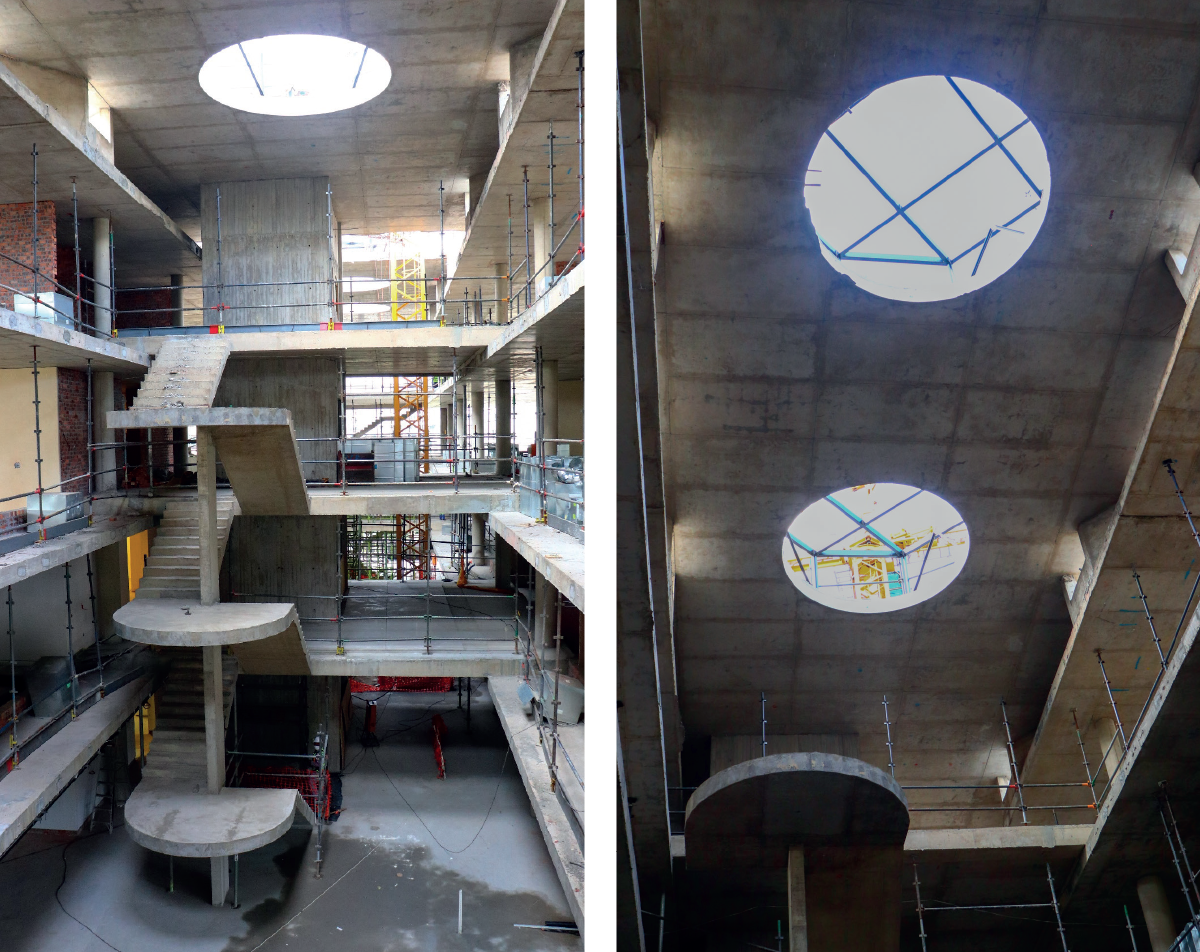 Energy performance is fully integrated into The Ridge’s design, which maximises light and ventilation and also manages water and waste resources efficiently.

A 16-metre high atrium provides a chimney effect from the first floor, drawing air through openable roof vents, enabling temperature control. The open ground floor street makes the most of light from this atrium to create a green space in which staff and visitors can feel at ease. This part of the building houses reception, meeting rooms, a staff canteen and public coffee kiosk. Balconies encourage employees to be outdoors more, with planted balconies serving as shaded breakout areas that enhance air quality and general employee wellness. Small pause areas in the working zones give staff the freedom to work from where it is most suitable, rather than being tied down to a formal desk.

Great emphasis is placed on urban mobility aspects, where employees and visitors will be encouraged to abandon motorised transport in favour of rapid public transport or more sustainable non-motorised modes, including pedestrian and bike. The people-centric design philosophy extends to the interior fitout of the building, influenced by best-practice examples of commercial office buildings, including the Edge in Amsterdam, home to Deloitte and one of the most highly regarded green buildings in the world.

Energy performance is fully integrated into the Ridge’s design, which maximises light, ventilation and manages water and waste resources efficiently. In general, the heating and cooling for the building is provided through a combination of passive ventilation technologies that are supported by mechanical air-conditioning equipment that is used when required by outside temperatures. The building can operate in two modes – either as a conventional sealed air-conditioned building, or alternatively in a passive naturally ventilated mode in favourable weather conditions. A warning green/red light system controlled by the BMS will advise employees whenever possible to open the windows to allow in the outside air.

By using already-existing material rather than purchasing material still to be manufactured, the project saved 30 tonnes of CO₂. This is the same saving as taking 6.5 passenger vehicles off the road for a year.

A breath of fresh air

The building also has a thermally activated building system (TABS) installed in the floor slabs that regulates temperature by heating and cooling the actual building mass using water pipes imbedded in the concrete slabs. With TABS operational, the building has the potential to naturally ventilate for between 75-85% of the year. This results in a direct saving in HVAC operating energy costs. The HVAC system has been designed to require less energy to distribute the cool air through the building, using displacement ventilation with the void beneath the raised access floor.

In order to optimise available natural daylight penetration and views, while minimising direct solar incoming radiation, the sawtooth cross-laminated timber (CLT) and glass façade incorporates the manually operable windows. The sawtooth shape ‘corrects’ the orientation of most of the building’s double-glazing so that it faces either north- or southward. This standout feature involved extensive thermal modelling to determine the exact angle of the design and is also the first instance of cross-laminated timber in the façade of a commercial building in South Africa. Timber, including CLT, brings to the project a substantially lower embodied energy and carbon footprint than any of the traditional cladding systems, including aluminium, glass and concrete.

The Ridge also includes rainwater harvesting and grey water treatment facilities, co-located in the basement. The harvested water is treated to near potable standards, to be used for irrigation and WC flushing. The roof will harvest solar photovoltaic power via the placement of PV panels on the roof facing the optimum direction. The building is expected to generate around 25% of its own energy requirements.

With construction restrictions now lifted, work has re-commenced onsite, and the finishing touches look set to be complete towards the end of 2020. Amidst the lingering threat of Covid-19, a healthy building that focuses on the wellness of its occupants has never been more of a priority, and the Ridge meets this new challenge with ground-breaking success.

The next milestone at The Ridge is to make the building a living breathing one.
Ecobrick construction

Ecobrick production is simple and non-technical – it simply requires stuffing a 2-Litre PET plastic bottle with plastic waste until no more can be forced into it. Density is important so for a construction project of this scale, each ecobrick must be carefully checked for compliance.
Concrete has a high environmental footprint, so construction companies make use of ‘void formers’ to ‘fill’ space and reduce the amount of concrete required. However, the polystyrene (EPS) normally used as void formers is also not an environmentally friendly option. Ecobricks are therefore an ideal replacement. 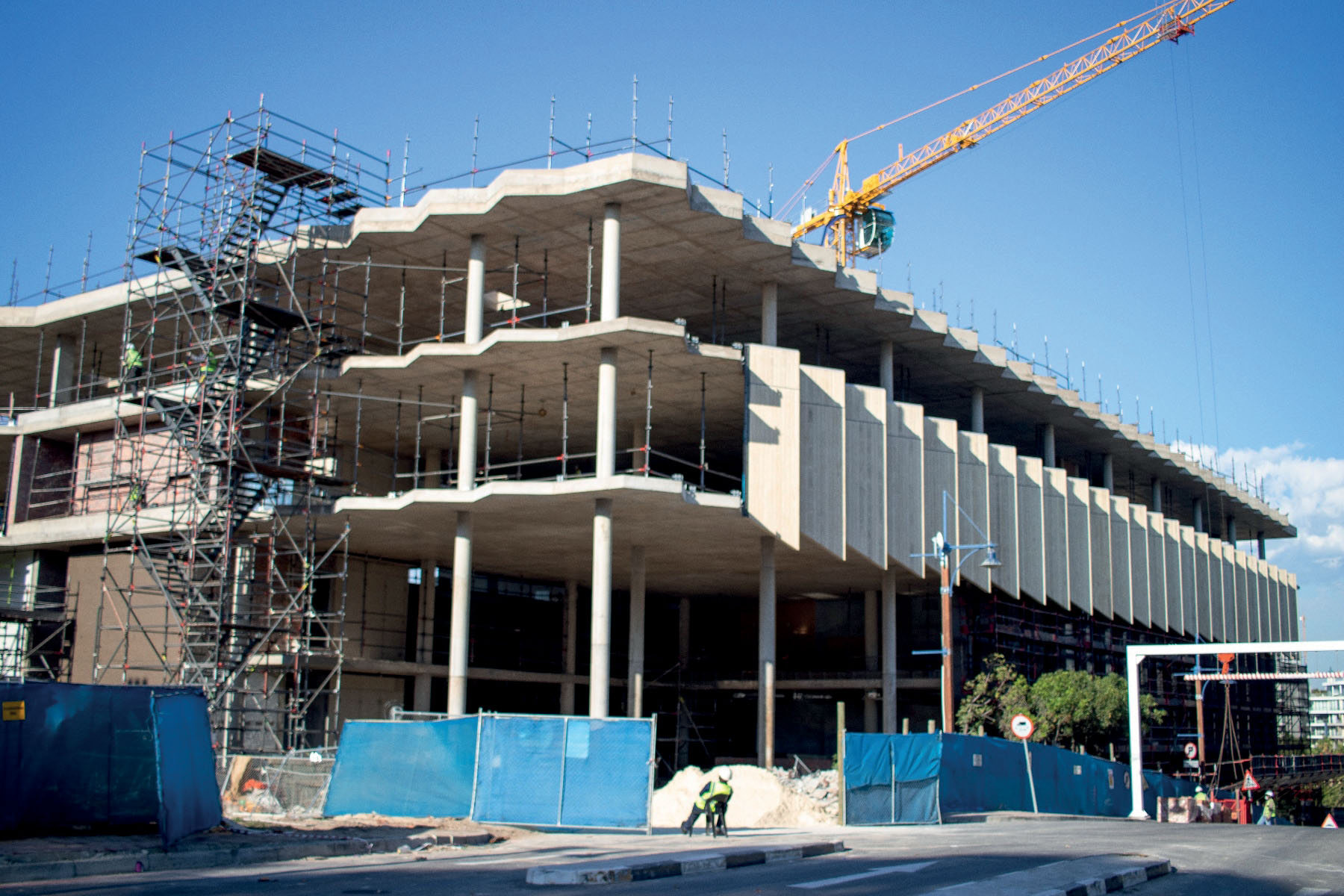 The building can operate in two modes – either as a conventional sealed air-conditioned building or in a passive naturally ventilated mode in favourable weather conditions. 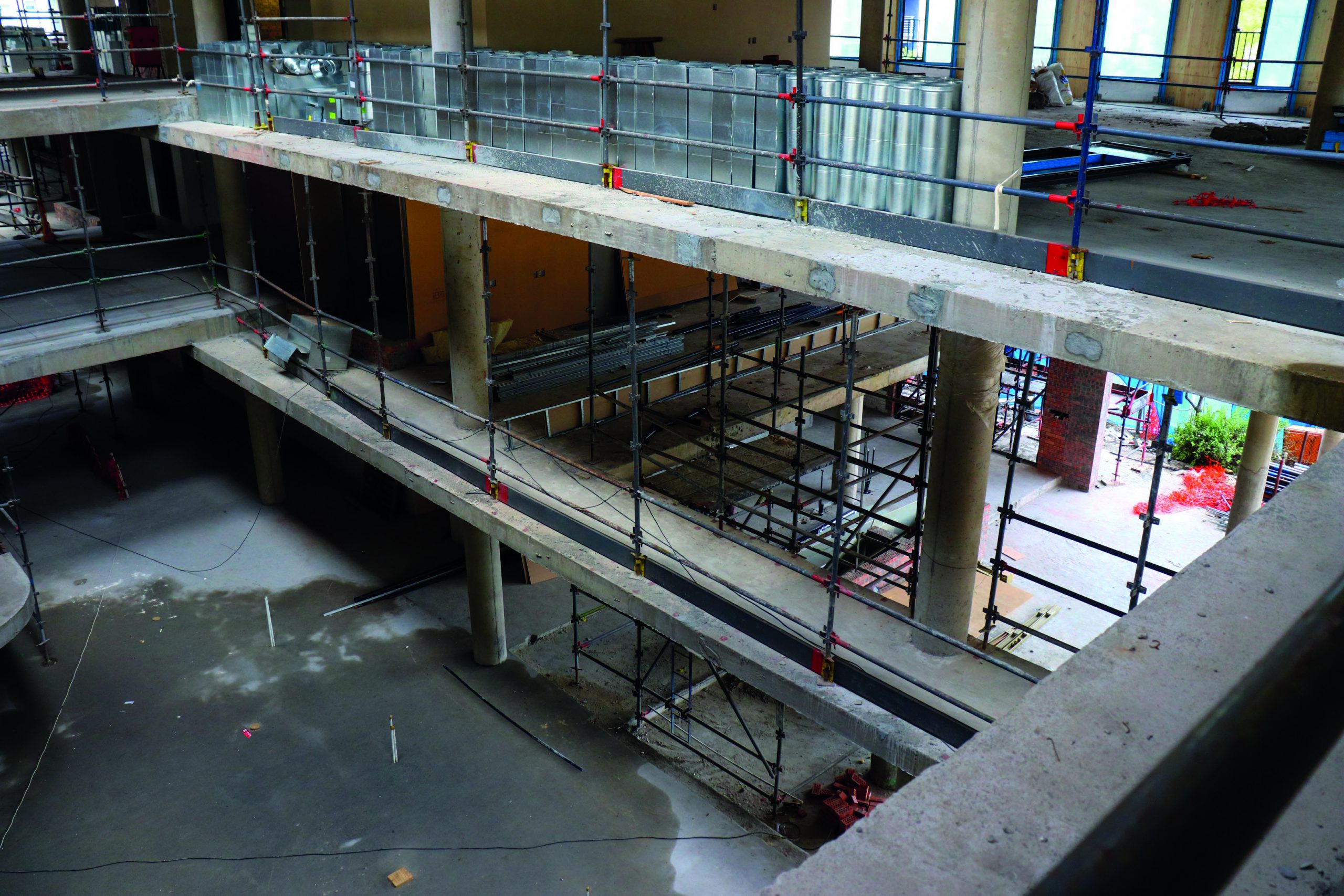 The significant difference between a normal brick and an ecobrick lies within its performance. Normal bricks can carry load whereas ecobricks rely on a framed structure (such as concrete, timber or steel) to carry the load.

Studies indicate that a PET plastic bottle will take 450 years before it starts to break down if shielded from the sun.

With construction restrictions lifted, the V&A Waterfront’s development team has returned to The Ridge site to install the long-awaited façade. The first cross-laminated timber (CLT) and glazing panels have been mounted along Marine Road. These custom-made panels with openable windows are one of the key sustainability features of The Ridge building and will assist in the natural ventilation of the office floors. Cross-laminated timber is a green and sustainable material since it is made from renewable wood, sequesters carbon, and does not require the burning of fossil fuels during production.
The next milestone at The Ridge is to make the building a living breathing one. It will consist of mixed-mode climate control to cover TABS, displacement ventilation and natural ventilation. Thereafter, a world-class interior to cover plant-scaping, flexible working areas, and staff wellness focus to name a few.

The Ridge is a new 8,500m2 office building in the V&A Waterfront and features a number of ‘firsts’ for the green building/sustainability industry, setting new standards in South Africa. Among these innovations is an energy-efficient air conditioning system with passive climate control measures utilising Daikin’s R32 as its refrigerant.

The project is the result of a collaboration between Arup Consulting engineers, Two Oceans contracting and Daikin Air Conditioning South Africa. Daikin, a multinational manufacturing company, supplied two EWYQ230F-XL high-efficiency, low-noise, heat pump chillers, along with a EWAT280B-XLA2 heat recovery chiller in order to take care of the cooling and heating requirements of the building.

Daikin equipment was chosen due to its well-deserved reputation of being the leader in the field of air conditioning energy efficiency and heat pump products. This is backed by Daikin’s extensive experience in adopting refrigerants with a lower environmental impact. They were the world’s first company introducing a new generation of air-cooled scroll chillers with R32 used in the Ridge.

The use of R32 as a refrigerant is the perfect fit as it has much lower GWP (Global Warming Potential), reduced charge and it is pure, meaning it is easier to reuse and recover.

All equipment installed is top of the range high efficiency chillers to improve the sustainability of The Ridge.