The new SABIS® International School – Runda in Nairobi achieved a 4-Star Green Star Africa-Kenya PEB v1 Design Rating in April 2020. The school was presented as a case study at the World Green Building Week in September, and a tree-planting ceremony is being planned as part of the Green Star design certificate handover process.

With a GFA of almost 14 600sqm, the school is conveniently located near the Northern Bypass in Kiambu County. The project was developed by the SABIS® Network, a global network of schools that dates back to 1886 and currently educates over 70 000 students in 20 countries on five continents. Concept design architects on the project were Archika, with Boogertman + Partners as executive architects. The green building AP (accredited professional) team comprised WEB Limited, a Kenyan-based sustainable development consultancy and co-founding member of the Kenya Green Building Society, in collaboration with Solid Green Consulting. 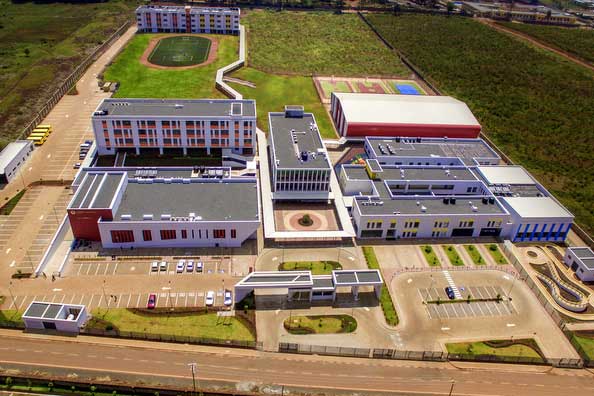 The school has a busy highway to the north, and an accessed road to the south. Cycling and public transport facilities have been provided.

The design, construction, and operation of the buildings in which we work are responsible for the consumption of many of our natural resources.

Elizabeth Wangeci Chege of WEB Limited explains that the site was chosen to meet the growing demand for a new school in an area that has become densely urbanised in the last 10 years. Being very close to the Equator with no extremes in weather, conditions lent themselves to passive design; the soil is conducive to plant growth and biodiversity, and rain is abundant for harvesting.

The SABIS® Network has developed schools in different regions in the Middle East and South America, and the concept design had to be contextualised, acclimatised and aligned with local expectations. For example, following the attack on the Garissa University College in April 2015, a top priority was security, which necessitated a boundary wall and physical barriers between the buildings.

“Safety on-site is also paramount,” comments Anthony Opil, project architect at Boogertman + Partners. “The site is on a steep slope so the buildings were staggered and connected with soft, landscaped ramps – working with the terrain to make the buildings easily accessible to one another and for the mobility impaired. Courtyards were also designed for different age groups with specific play areas for the lower school and high school – which was an approach that was customised to local expectations.”

The school is bound by two roads to the north and south respectively, with the northern road being a busy highway. SABIS® had to provide a budget and infrastructure to access the southern road, which is much lower and further away from the school. The original design was mirrored to avoid traffic and highway noise, and cyclist and school bus facilities were provided.

Play areas have been provided for different age groups.

Another key consideration was resource efficiency. While there is a greater reliance on mechanical ventilation and heating in other countries, in Kenya, with its high energy costs and a consistent climate, a more appropriate response was developed.

The classroom blocks were oriented north/south with openings, particularly in the study areas, that do not face east or west. Heat gain from outside surfaces was limited by merging soft and hard landscaping and, in the site planning, by ensuring that paved spaces do not bounce heat back into the internal spaces. Air pollution was also mitigated by ensuring that the school bus parking areas, which are planted with young trees, are oriented to prevent exhaust fumes from entering the buildings.

Locally available materials and technologies were specified where possible, such as concrete hollow blocks and roof insulation to improve thermal massing. This was a departure from the typical local construction practice of using natural stone because, says Opil, the hollow blocks were more climatically appropriate, enabled costs to be reduced, and were readily available thus circumventing supply issues relating to stone.

Natural lighting and ventilation were modelled and optimised by increasing the height of the windows specified in the original design. Together with the selection and procurement of low-VOC finishes – such as paints, adhesives, and sealants – to ensure that the children are not exposed to toxins, this ensured a significant improvement in the school’s Indoor Environmental Quality. Elizabeth Chege explains that, although the AP team did not conduct embodied energy calculations for materials, this strategy was used to govern the specification of materials; and workshops were held with both the client and contractor to ensure that targets were met.

Solar water heaters were installed to reduce energy consumption, and a modular solar PV system was designed for optional adoption – to provide panels for classrooms in the next phase of the development, to cut back on consumption and reduce operational costs.

Electricity and water sub-metering was provided for each block with smart meters connected to the BMS to monitor and manage consumption and to offer a learning resource for the school children and their carers. The school was also the first in Kenya to install 100% LED lights in all spaces, thus gaining an additional Green Star Innovation point.

Natural lighting and ventilation have been optimised by increasing the height of the windows.

Boniface Chege, also of WEB Limited, says that the project is performing so well in terms of water consumption that the team will consider targeting a Net Zero Water certification which, if successful, will be the first in the region. “We had to consider how children behave and how they like to play with water,” he says. “We reduced consumption by specifying low-flush toilets and low-flow taps with sensors.

“Potable water consumption for landscape irrigation has been reduced by 100% using a rainwater harvesting system and recycled black water system. This is backed up by a borehole with variable speed drive (VSD) pumps and municipal water as a last resort. For the Green Star rating, we achieved 99,9% of the available water credits by using context-appropriate systems such as efficient fittings and the treatment plant – thus contributing to the long-term resilience of the school.”

Elizabeth Chege adds, “To treat the sewage emanating from the facility, a membrane bio reactor (MBR) – a process of membrane-based technology – was provided. In this process, the excess sludge does not require separate digestion and the quantity of sludge generated is minimal. This avoids the cumbersome sludge disposal exercise which needs more manual labour and land area. The treated water from the system is disposed of into an overhead tank to flush toilets by gravity. The supplier and installer of the system was also appointed to maintain the system during operations.
“A workshop is being planned with the school’s operational team to ensure a smooth transition from design to operations by sharing information, and consumption data is already being reviewed. The team will also implement an occupancy survey plan to ensure ongoing comfort and usability for users.”

A FIRST in waste management

Construction waste is currently a topical discussion in Kenya and this project has become a case study for the National Construction Authority, for other contractors to adopt. The reason, says Elizabeth Chege, is that the tender and preliminary documentation was very clear, so the contractor was informed at the outset of the required standards. The contractor, therefore, appointed a local waste consultant to ensure that the waste was recycled and reused, and 96% of the construction waste was tracked, weighed and diverted from landfill.

In terms of operational waste, spaces were provided on-site for separation of waste; and recycling bins were clearly labelled for use by the school children and staff. Paper and cardboard, plastic, metal and cans, glass bottles, and food waste are all separated during operations. The appointed waste collection company was awarded a contract on the basis that they collect the separated waste in trucks that maintain separation, and they have an extensive sorting site that employs women and youth. 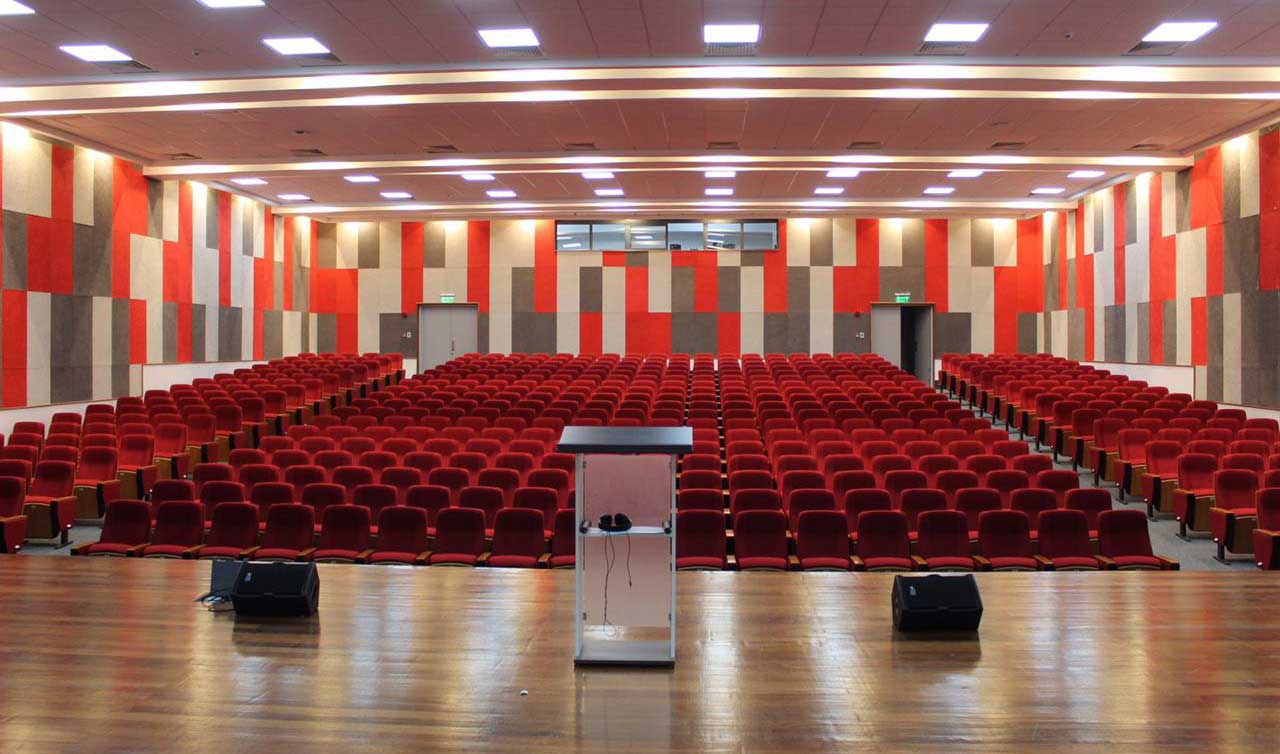 A benchmark for East Africa

“The growth and development of school infrastructure have a large impact on our natural environment and communities,” shares Austin Opiyo, SABIS® facilities manager. “The design, construction, and operation of the buildings in which we work are responsible for the consumption of many of our natural resources. We are glad that SABIS® Runda is a leading example of a green school and has gone ahead to be a corporate leader in sustainability initiatives.”

“Research has shown that certain green building factors positively influence learners’ performance at school,” notes Chilufya Lombe, director at Solid Green. “SABIS® Runda is the first school in the SABIS® Network to be completed and undergo certification in Africa, with more planned in future. With this project we have shown that schools, where our children spend most of their time away from home, can be green too. We hope that other learning institutions in Africa will also adopt green building certification and become part of the call to climate action.”

“This certification sets an example for the rest of the region,” says Elizabeth Chege. “We were thrilled to be part of the process of opening up the Green Star Africa PEB tool for countries outside South Africa. The client was dedicated to achieving this aim and the professional team and main contractor were completely open-minded about the process, enabling us to efficiently meet the required credits.”

In both its realisation and certification process, SABIS® International School – Runda has successfully set a new benchmark for schools and the green building sector in East Africa.