Its value may be debated in environmental circles, but the ecobrick exists.

Another ECOBRICK
in the wall

What is an ecobrick and why use it in construction? Put simply, this empty polyethylene terephthalate (PET) bottle is hand-stuffed with tightly compacted, single-use rubbish: from sweet wrappers, clingwrap and foil to assorted soft plastic. Ecobricks can stop rubbish with no or low recycling value from reaching over-capacity landfills.

The International Union for Conservation of Nature’s National Guidance for Plastic Pollution Hotspotting and Shaping Action report on South Africa (December 2020) estimates that the country generates about 2 370-million tons of plastic waste annually. Of that, 70% of plastic waste is collected, but only 14% is recycled. South Africa’s per capita plastic waste generation is about 41kg per year, above the 29kg global average.

Now consider that the built environment generates nearly 50% of annual global carbon emissions. Of those, building operations are responsible for 27%, and building materials and construction (embodied carbon) an additional 20% annually, according to the Global Status Report for Buildings and Construction 2021.

ECOBRICK FLOORS AT THE RIDGE

So, in that context, it’s unsurprising that a V&A Waterfront goal was to create a Cape Town commercial property that pushed the boundaries of sustainability in design. As a new, low-energy building, The Ridge was designed to achieve a reduction in operational carbon emissions of up to 82%. It achieved a GBCSA 6-Star Green Star for both design and as-built ratings for Office Design v1.1 rating and won “highest-rated building”. Its use of ecobricks was an innovative aspect.

Tessa Brunette, sustainability leader for Africa, India and Middle East at Arup, was the engineering lead on The Ridge. The company offers consulting engineering within the built environment and worked on the project from 2018 to 2021. “The ecobrick idea came about in one of our early ‘blue-sky thinking’ workshops with the team including the client, V&A Waterfront, and architects, studioMAS,” explains Brunette. “We were throwing all sorts of ideas around and the question was asked: aren’t there better ways to fill voids than by using either virgin polystyrene or a lightweight concrete?”

A novel solution was suggested to make up the floor level difference in the building. “The office areas in the Ridge building have a raised access floor. It’s a ‘false’ tiled floor surface that is installed on pedestals on top of a concrete floor slab, creating an air void used for services,” says Brunette. In the toilet areas, where raised access floors weren’t required, instead of making up that depth difference by using standard solutions – virgin polystyrene filler or lightweight concrete – ecobricks were the material of choice.

Using an untested material in the floors brought challenges. Brunette says the biggest issue was the reliability of the ecobrick’s structural strength in relation to its density. “To solve this, we designed it so that the inconsistency was not a problem. We didn’t rely on the ecobricks to carry any load. All they had to do was fill the floor void,” she explains.
“There was a thinner concrete layer and a steel mesh inside the concrete: the combination of the steel mesh and the thinner concrete layer spreads the load so that it isn’t carried by the ecobricks.” Effectively solving the unreliability issue and reducing the project’s carbon footprint by avoiding virgin material.

The outcome? “Everyone was happy. It took a lot for us to get to the right solution when designing. So, there were a few iterations during the design phase, but once that was all resolved and there was a trial/prototype pour, it all happened very quickly.”

• Concrete has a high environmental footprint, so void formers are used to “fill space” and reduce the concrete required. Polystyrene void formers are not recyclable as they’re made of virgin hydrocarbons.
• Using ecobricks in The Ridge was a first for the building sector globally.
• Ecobricks were placed vertically to fill the 450mm-deep void adjacent to access floors.
• The total void volume in the building is 41m3, equating to 14 000 ecobricks. Each bottle weighed 418g.
• Ecobricks were also used to create flowerbeds in the adjacent food garden.
• The Ridge ecobrick system used about 5.5 tons of single-use plastic pollution. Working off the 41kg per capita average plastic waste generation in South Africa, these void formers are the equivalent of 134 people’s annual single-use plastic waste. 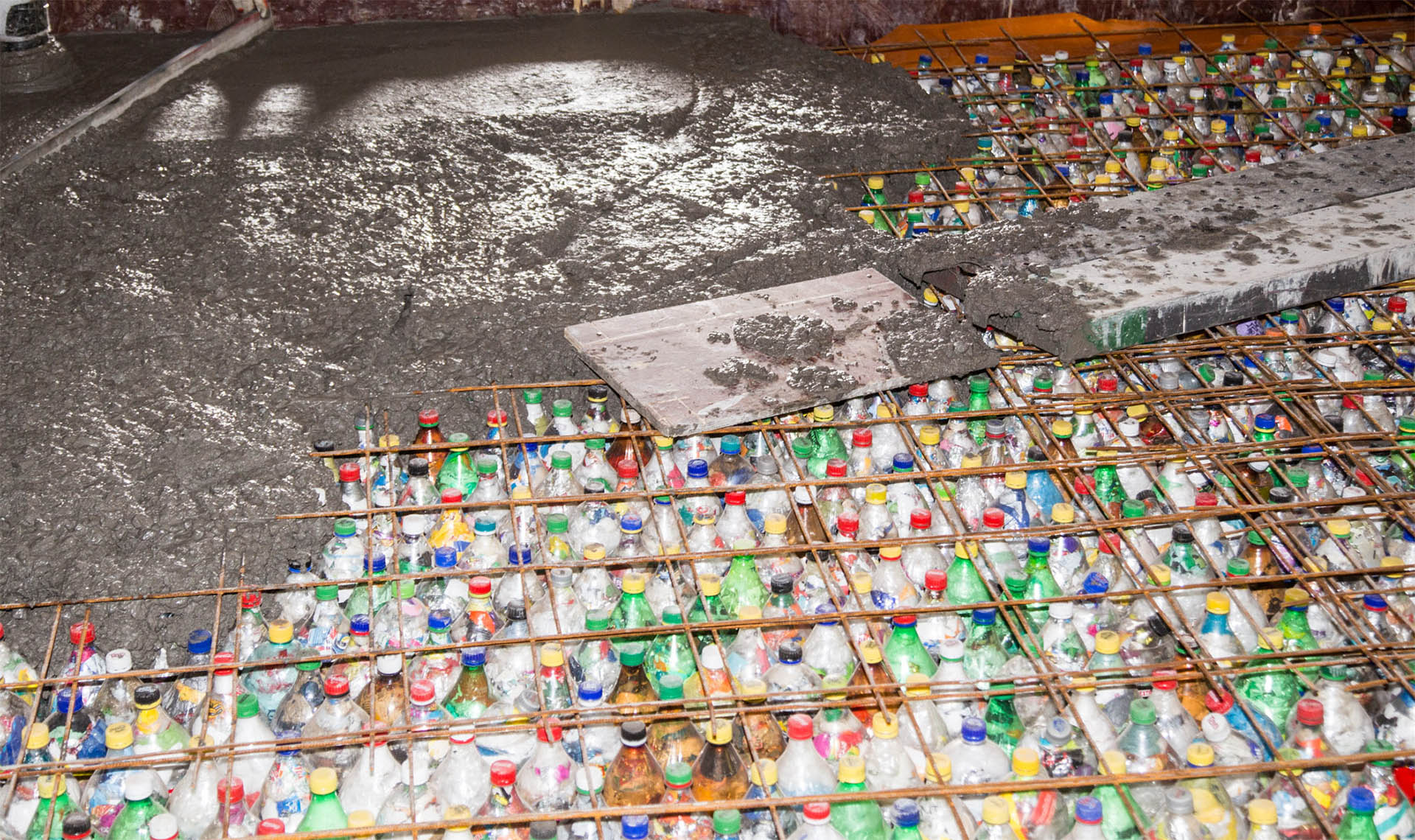 Steel reinforcement mesh was placed on top of the bricks to keep them in place during concreting and to control cracking in the concrete.

EDUCARE CENTRE FROM MUD AND WASTE

The project has taken five years. Sustainable builder Peter McIntosh of Natural Building Collective provided the hands-on design expertise. He has no formal building qualifications, but leverages skills learnt during two decades of living and building off-grid homes in a South African permaculture community. Much of his ecobrick experience was acquired while running a green building academy in Guatemala.

“We use ecobricks in our building projects because they exist, and it shows that the community wants to contribute. But there are positives and negatives,” says McIntosh. “If you’re in Guatemala, people take the trash and just throw it into the waterways and elsewhere. There’s no official waste collection. So, picking up a plastic bottle and ecobricking is doing somebody a favour because you’re picking up trash.”

In South African metros, where two-litre bottles are more likely to go into recycling streams, McIntosh isn’t convinced about the usefulness of ecobricks. “Context is important,” he says.

“There are ways of using ecobricks responsibly. If you put trash in them in rural Transkei, that trash won’t make it into the waste stream, so it makes sense.” It’s also about the practicality of ecobrick forms. “When building, it’s impossible to design anything around a round plastic shape. From a fire point of view, plastic is dangerous, so it needs to be built in a responsible manner,” he continues

“But on the positive side, ecobricks take up space, so that spares the need for other virgin materials.” At Ulwazi, McIntosh used an innovative system to capture carbon by using rows of recycled tyres to build thick walls, each filled with crushed building rubble and earth. “When we packed out recycled tyres with cob to create walls, we put ecobricks into spaces between the tyres, so there’s a saving of materials there,” McIntosh explains.

“And if I build properly so they’re not a fire hazard, ecobricks can provide the most beautiful walls and art. You can leave some ecobrick backs or caps exposed in a wall. In Ulwazi, we built the internal walls from ecobricks and created amazing wall patterns.”

Fernie says changing to more innovative building practices is vital. “We’re in the midst of the most significant climate change crisis in human history – look at the catastrophic KZN floods, yet Gqeberha is running out of water,” he explains. “Our creativity has to go towards looking at genuine solutions to the amount of waste we’re producing. And to sustainable living, which includes sustainable building practices.”

Our creativity has to go towards looking at genuine solutions to the amount of waste we’re producing.

Plans were in place for the original Ulwazi space to be renovated once the children moved into the new section. “My building philosophy is not constrained by the materials I use,” says McIntosh. “It’s got to be durable, kind to the planet and to have a social impact – we employ a lot of local community labour. So, these buildings aren’t more expensive in terms of materials because so much is upcycled. But do have higher labour costs because they are more labour-intensive.”